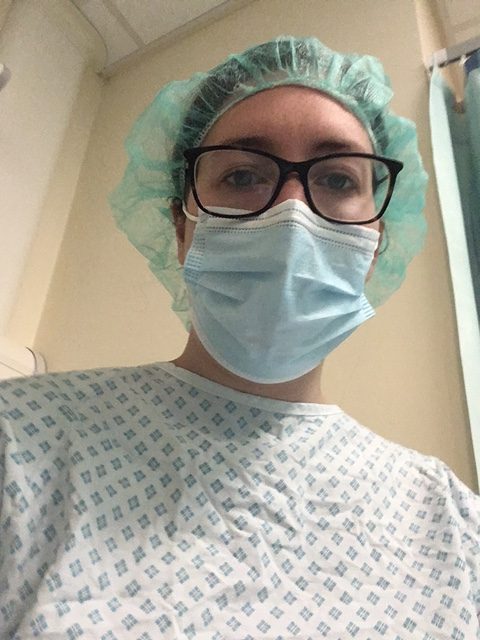 I’ve been a bit quiet on here recently. Those of you who follow me on Instagram will know the reason already. Finally, I’ve had my first IVF cycle!

Where it all Started

On 17th August, I had my paperwork appointment at the clinic in preparation for our IVF cycle. It was the first time I’d been to the clinic since the second month of my letrozole treatment back in November last year! In that time, the clinic has moved out of the hospital and into a new building. I have to say, it’s a much nicer, more modern building and makes for a better experience all round.

After our sixth failed cycle of letrozole in February we were put on the IVF waiting list and told to expect it to take six months due to the COVID backlogs. Well…they weren’t kidding!

Simon was able to attend the clinic with me for the first time since our initial appointment pre-pandemic. The vast majority of the time we were there was spent signing forms, deciding what should happen to our embryos in a range of circumstances and having blood tests. My treatment protocol (short due to my PCOS) was explained to me and then we were sent on our way, armed with a prescription of provera and the pill.

Preparation for the IVF cycle 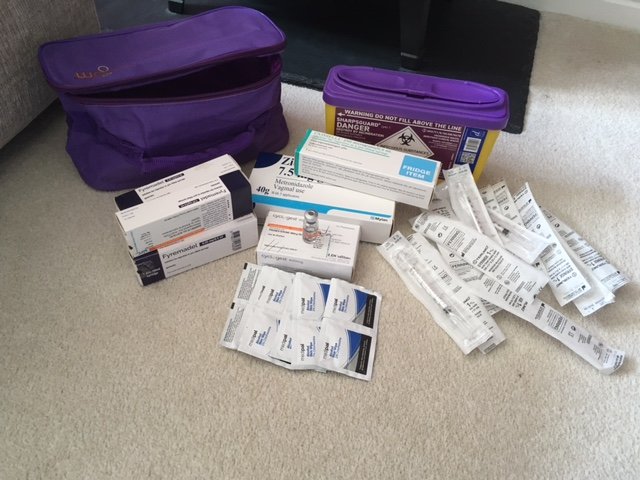 In advance of the appointment I’d had a suite of blood tests taken and Simon had provided another sperm sample. This was to make sure that there were no changes as it had been so long since our initial fertility testing.

Due to the fact I don’t have regular periods, I was given a course of provera to start taking a few days after the paperwork appointment. The aim of the medication is to induce a bleed within a week of finishing the course of tablets. I’ve had provera a few times before and it worked just like it had done previously.

The nurse who saw us for the paperwork appointment explained that I should ring up when I started a period to see if there was space for me to start treatment. If not, I’d been given a month’s supply of the contraceptive pill to start taking. The idea being that if I were to take the pill for the month, they could predict when my next cycle would start and plan for me to be treated.

As luck would have it, I rang the clinic on day 2 of my cycle – bank holiday Monday – and they wanted me in to start treatment the next day!

Of course, just because I’d lucked out with being able to start an IVF cycle straight away didn’t mean everything would be plain sailing. Due to the Bank Holiday, I was unable to collect my medication prior to being scanned. So I had to go for my baseline scan (all good), drive to the other side of Halifax to collect all my medication and then return to the clinic to be taught how to administer it all.

After about 4 hours of going back and forth and waiting around, my first stems injection was done and I was homeward bound. Five days later, I was back to be scanned. At this point I had 10 follicles growing nicely and was advised to keep injecting with menopur at the same dosage as well as introducing a second injection – ganirelix. 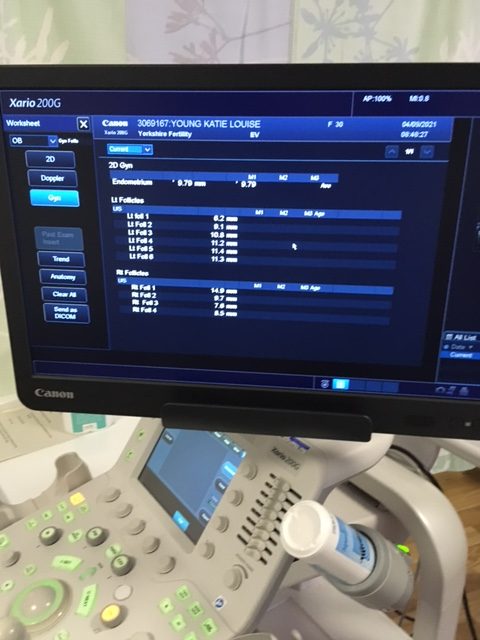 Another five days passed before I was back again for another scan. In the meantime I’d become a bit uncomfortable and felt particularly bloated. I even looked about six months pregnant. So it’s no surprise to find out that my ovaries had gone into overdrive. I now had over 50 follicles between both of my ovaries with multiple large follicles!

Because of this, it was time to schedule my trigger shot for that evening. Due to the risk of over stimulating causing OHSS (Ovarian Hyper Stimulation Syndrome), my trigger shot was changed from ovitrelle to buserelin. Time for another trek over to the pharmacy!

Precisely 36 hours after pulling the trigger, it was time for my eggs to be collected. Instead of being in Halifax, this procedure was in Leeds – much closer to home! Simon was allowed in with me but after I was checked in, he was whisked off to do his bit. Once he was done, he had to leave the hospital.

I donned my cap and gown, had a cannula fitted and waited to be taken in. For the procedure, I was sedated. I’d never had sedation before so I had no idea what to expect. I hopped up onto the table, legs akimbo, and had a lovely lady talk to me while putting a speculum in. At this point it was very much just like having a smear test…but with more people in the room.

The anaesthetist explained that I’d be given a concoction of pain killers and it might make me sleepy. Well, I saw the liquid go in through the cannula, I remember looking at the ceiling light above me. And the next thing I knew, the doctor was saying that they had 17/18 eggs and I was being wheeled back to recovery.

After sleeping it off a bit in recovery, a sandwich and a cup of tea, I was delivered a letter telling me they’d actually collected 19 eggs. The nurse allowed me to contact Simon to tell him to pick me up. Typically, me being me, I had a funny turn and started throwing up. After the all-clear from a consultant, we were able to leave an hour or so later.

The next morning, I had a call from the embryologist telling me that 11 eggs had fertilised. We had 11 embryos going into the incubator. We wouldn’t get another update until the morning of transfer. In the meantime I had to have two check ups to determine whether I had OHSS. Or if so, whether it was severe enough to require a freeze all cycle instead of a fresh transfer.

Everything was fine with me so the fresh transfer went ahead! Unfortunately we didn’t have the news we’d be hoping for about our embryos. Only one embryo was good enough quality to be transferred on day five. Our remaining 10 were given an extra day but sadly, none made the freezer.

Trying to keep positive, we soldiered on through the dreaded ‘two week wait’. I kept warm, we went on walks to get the blood pumping, had a day trip to the coast. With every fibre of our beings we willed our little embryo to stick.

But this time, it wasn’t meant to be.