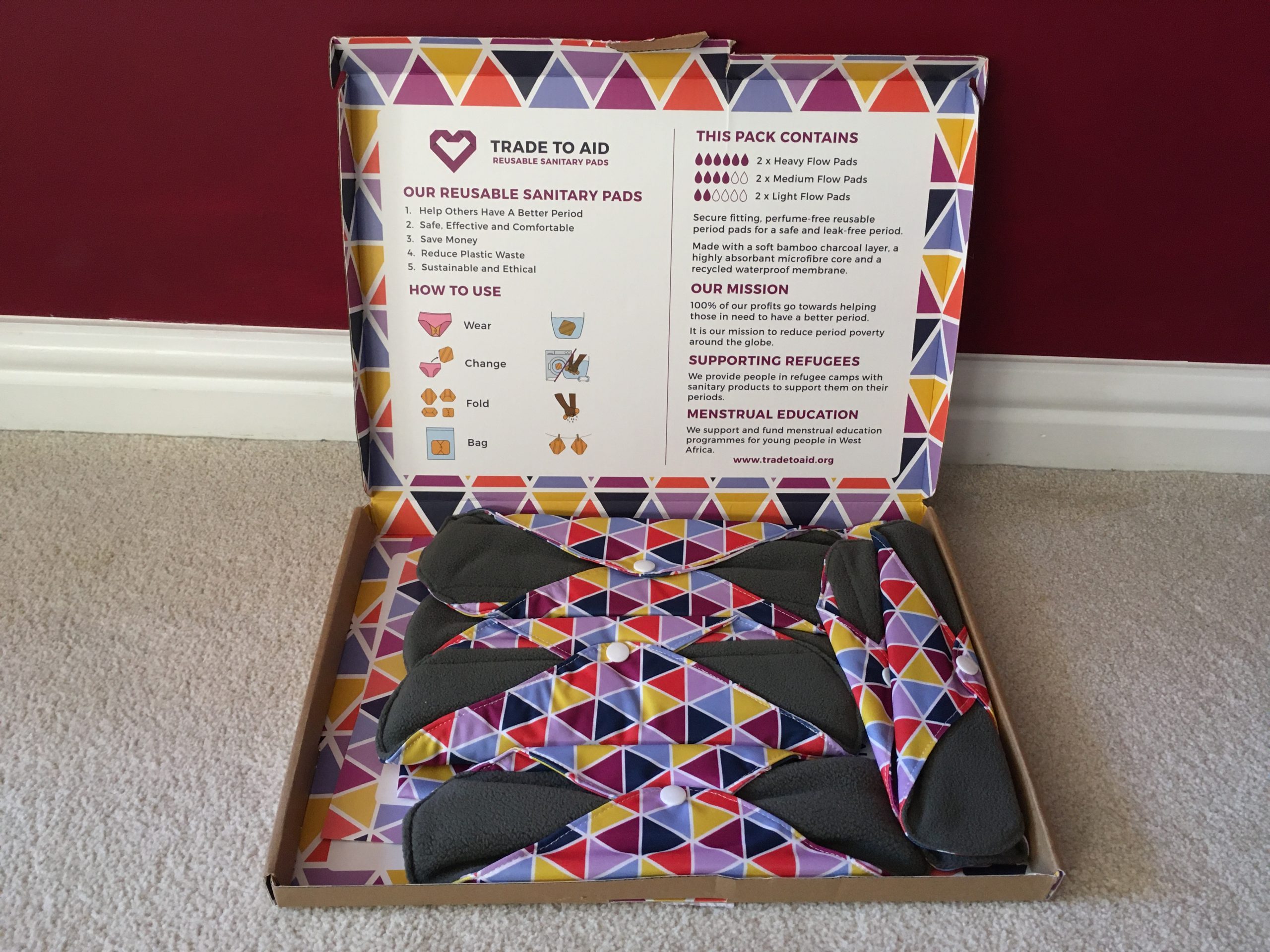 **This is a review of a gifted product. All opinions are my own.**

At a time when seemingly everyone is conscious about their sustainability and how their actions impact the both environment and their pockets, it should come as no surprise that sanitary products are beginning to come under fire. Is this the rise of reusable period wear?

Whilst some reusable sanitary wear has been around for a while now, disposable products are still, by and large, the norm. As we know, people are creatures of habit and thus tend to stick to what they know. Tried and tested, pads and tampons are still used by the vast majority of people who menstruate. 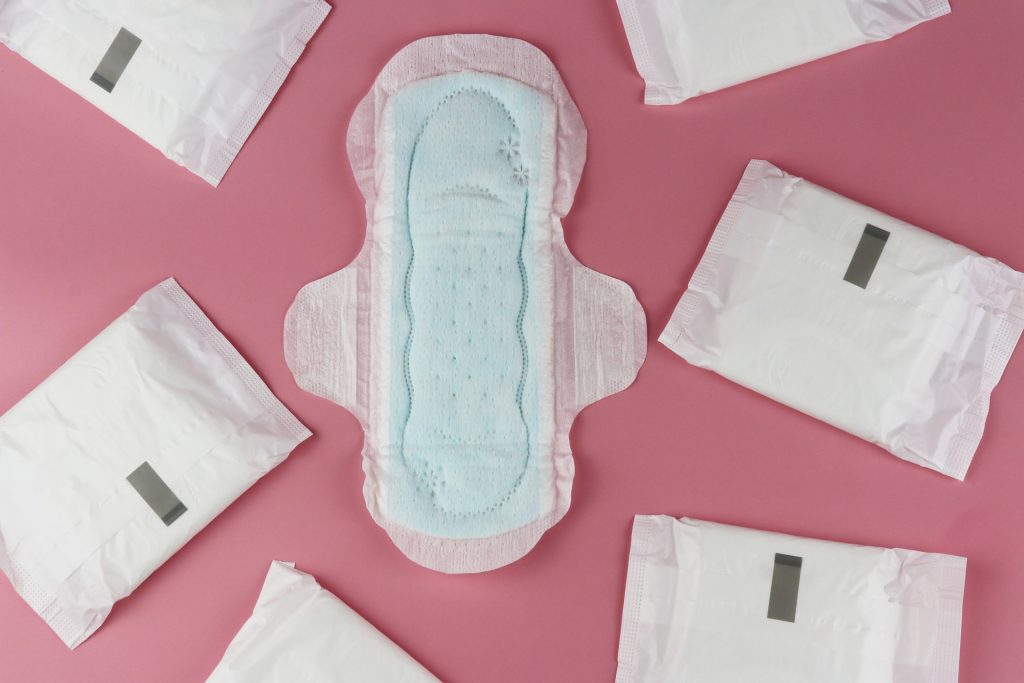 But in this ever-changing world, an increasing number are turning towards reusable period wear. It’s not hard to see why. An estimated 200,000 tonnes of waste generated each year is due to disposable sanitary products. A whopping 90% of a sanitary pad is plastic!

First on the scene was the controversial menstrual cup, of course. But recent years have seen an explosion in the amount of reusable period products that are available in the UK. Around 12% of UK women appear to have already made the switch to reusable period wear with many opting for reusable period pads. Typically these are made from an absorbent material, such as cotton, along with a waterproof plastic backing.

It’s not just the environment that benefits from switching to reusable products, though. Unfortunately even in the UK, many girls and women live in period poverty. This is a lack of financial means to access enough period wear. For many, this leads to missed days of work or education and knocks self-esteem.

As many as 10% of the UK’s population are considered to live in period poverty. A statistic that has driven change: NHS England provides free sanitary wear to those in hospital and students in UK schools, colleges and universities should now also have free access to period wear.

Reusable period wear could really change this. Whilst the products themselves are initially pricier than their disposable alternatives, they can be worn again and again. Over time, they are a much more cost effective way of managing your periods. 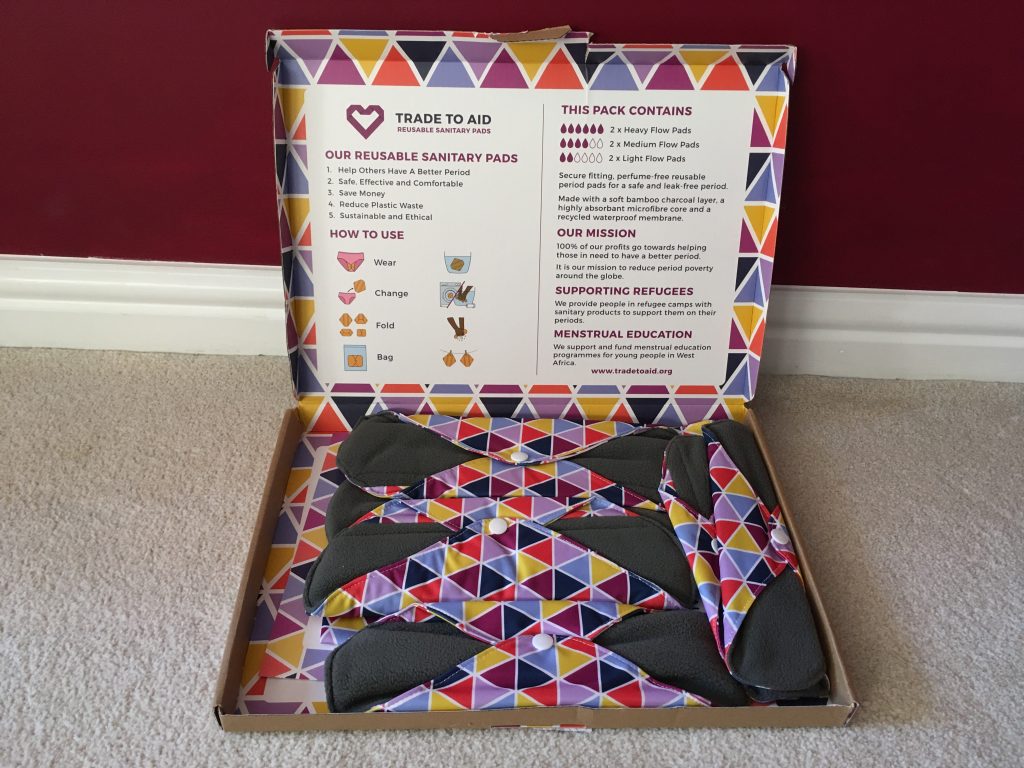 Trade to Aid is a company that is on a mission to combat period poverty around the world. Its initiative is admirable. It combines pulls on our individual desires to reduce waste and save money with our desires to contribute meaningfully by helping to alleviate period poverty among refugees.

Trade to Aid has created its own reusable sanitary pad kits. Each kit costs £29.97 and for every purchase, the company also donates a kit to refugees who are in need of period products.

What’s included in the kit?

The reusable period products come in a discrete box that fits through the letterbox. Once open, the box has a simple yet striking design that is echoed on the pads themselves.

In the lid of the box are some handy instructions, a contents list and some information about Trade to Aid and their mission. The info is also handliy provided on a leaflet, so there’s no need to keep the box. 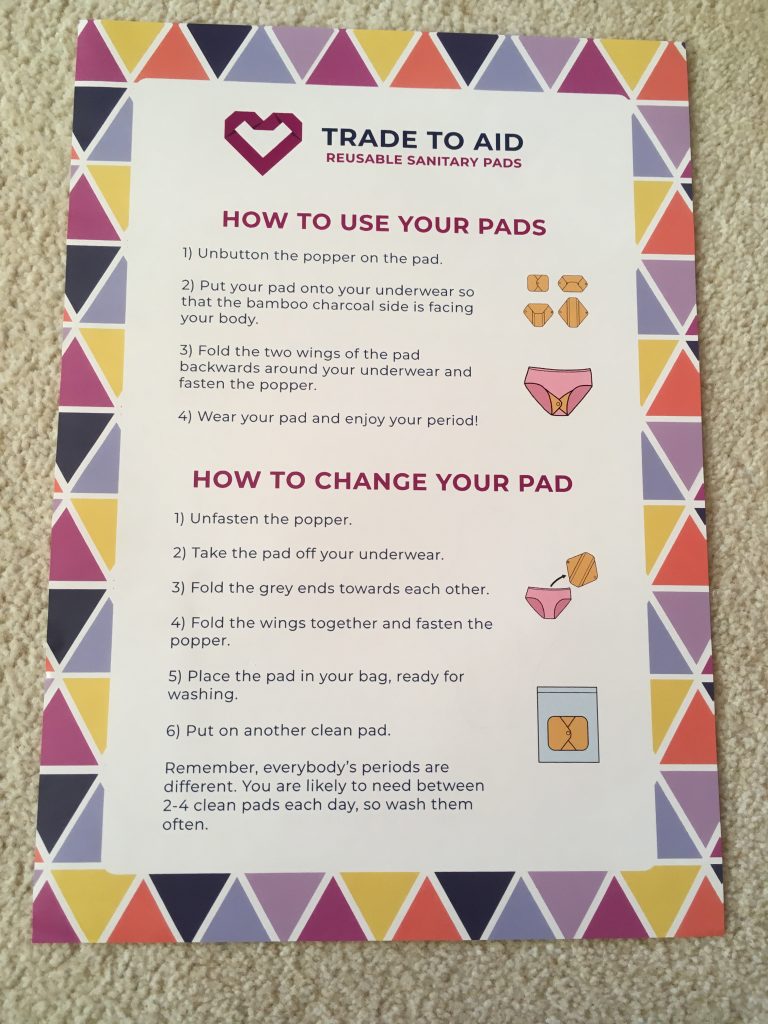 It includes six reusable period pads in total – in three sizes. There’s a useful little bag to keep them in, too.

The pads themselves don’t have sticky bits like an ordinary, disposable pad. Instead, the wings can be folded around your underwear and secured in place using a popper. Once used, the two ends of the pad fold in on themselves and the popper can be used to secure the pad in a folded position. Then just pop the used pads into the waterproof bag that’s provided. 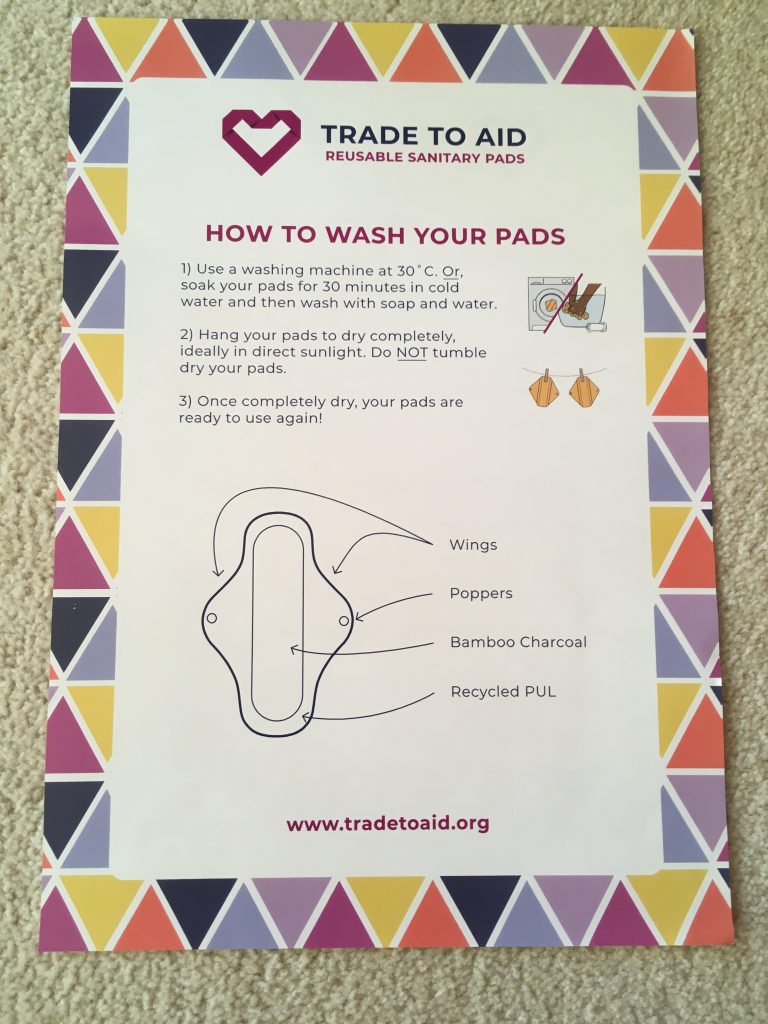 The pad itself is made of a bamboo charcoal and is similar to fleece in texture. It’s a dark grey colour and washes well. It is just as soft after washing as it was when first delivered. The under layer is made of a recycled plastic giving it a leakproof functionality, as you’d expect from a disposable pad. 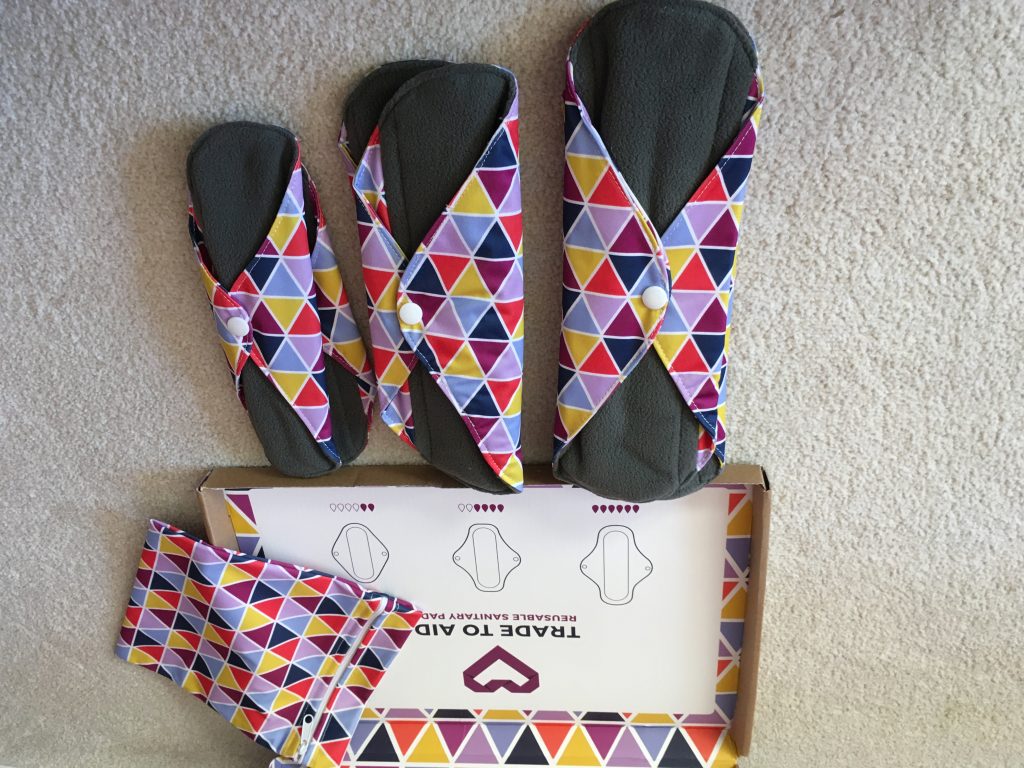 I have to admit, it’s been my first time trying reusable period wear but I’m already converted. The pads themselves are comfortable to wear and stay in place well. The three sizes provided are great for different stages of your period and more than stood up to my flow.

Not to mention that I’m saving money, doing my bit for the environment and helping a refugee in need. What’s not to love?