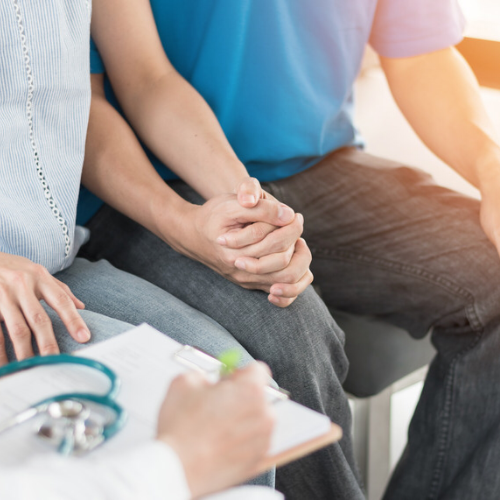 The Road to Referral

Let’s start at the very beginning… I am infertile.

And despite this not being a shock, it’s still an incredibly bitter pill to swallow. You see, my ovaries have never really behaved themselves.

It didn’t come as a surprise when, at 17, I was diagnosed with PCOS. Polycystic ovarian syndrome. For years, I’d suffered from heavy, painful, irregular periods. I could go without for months, then bleed for 2 weeks straight, only to start again after a week. I never knew whether I was coming or going. Coupled with acne on my chin I jaw line, and carrying weight around my middle, I’d come to the conclusion that I had PCOS long before I was diagnosed… Thanks Dr. Google!

After blood tests and an ultrasound, I found myself sat back in the GPs office. I could choose to take the pill in the hopes that it would lessen some symptoms and, otherwise, was told to come back when I was ready to conceive as I might need some help.

Understatement of the year!

And so fast-forward ten years and I dutifully returned when we were ready to start trying. Only to be laughed out of the surgery. You see, what my Dr actually meant all those years before was come back when you know you can’t get pregnant. How silly of me to have turned up before we’d been trying for over a year!!

Fast forward another few months, I’d had absent periods for 6 months and negative pregnancy tests left, right and centre. So, I returned. I remember walking out of that appointment feeling like a school girl who’d just had a telling off. I’d gone in with the aim of getting a prescription of provera – a drug given to induce a period and hopefully give my next cycle a kick start.

Instead, I was told that I had to be more patient; that having PCOS didn’t magically allow me a fast-track referral to the fertility clinic and that irregular cycles were part and parcel of the condition. After a lot of to-ing and fro-ing, the doctor agreed to send me for testing – bloods and an ultrasound – to confirm the PCOS before she would prescribe the provera. Finally we were getting somewhere!

Of course, all the tests confirmed what we already knew and I was given the provera to take. A couple of months later, I returned again for the referral to the fertility clinic and we’ve been on this treadmill ever since.